Jamie began his career at sea as a deck hand on-board a commercial fishing vessel working in the North Sea off the Holderness coast primarily fishing for crab, lobster and whelks. This is where he learned the trade and what it was like to be a shell fisherman. In 2002, Jamie left the fishing industry and moved into the offshore sector. After a short period crewing on a semi-submersible drilling rig, he accepted a position working on an emergency rescue and response vessel as rescue boat coxswain. Jamie progressed into the position of Bosun and gained vital skills in crew management and health and safety. In 2013, Jamie started his employment with the Holderness Fishing Industry Group (HFIG) as Marine Operations Manager and Skipper of the RV Huntress. In 2018, Jamie accepted the position of Managing Director and now leads the team and has overall responsibility for HFIG and the group’s commercial arm (Marine Scientific Services, Ltd). 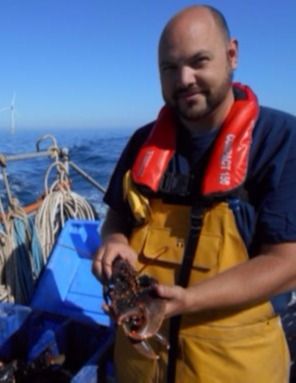 Mike spent a former career in the Royal Navy specialising as both a weapons engineer on submarines and hydrographic surveyor on RN survey ships. On leaving the RN, he undertook his undergraduate degree at the Centre for Environmental and Marine Studies at the University of Hull studying Coastal Marine Biology. On graduation Mike started employment as fisheries observer at Holderness Fishing Industry Group (HFIG) whilst also self-funding his PhD at the University of Hull. His PhD, awarded in 2020, focused on the impacts of an offshore wind farm on commercially important crustacean species, which aligned with the concerns raised by the fishing industry. He now leads the offshore research program of HFIG, whilst also acting in the capacity of crewman for the RV Huntress and relief skipper. He represents HFIG on several advisory panels and engages a wider audience to the concerns of our industry and the environment in which they work. His research interests focus on offshore wind and fisheries interactions and the biology and ecology of the target species of the fishery. 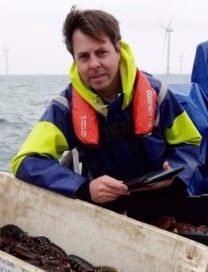 Dr. Terschak recieved his PhD in Chemical Oceanography from the University of Alaska Fairbanks - School of Fisheries and Ocean Sciences looking at the fate of oil in the coastal marine environment (Susan Henrichs and David Shaw, co-advisors). His undergraduate degree is in Chemistry (Analytical) from the Rochester Insitute of Technology in New York. Before joining us, he has worked in the United States at the University of Alaska in Fairbanks and in Anchorage, American River College in California, the Illinois Insitute of Technology in Chicago, and NASA Glenn Research Centre's Plum Brook Station.  He was part of the team at the University of Hull (Jorg Hardege's lab) that discovered the chemical pheromone female crustaceans release just before mating. In addition to investigating the physical science-side of the oceans (chemistry, geology, physics), he also designs and builds scientific instrumentation for at-sea data collection and monitoring and oversees the laboratory and research shellfish hatchery.

A narrative about the history of HFIG, MSS, and YMRC and how they are interrelated.